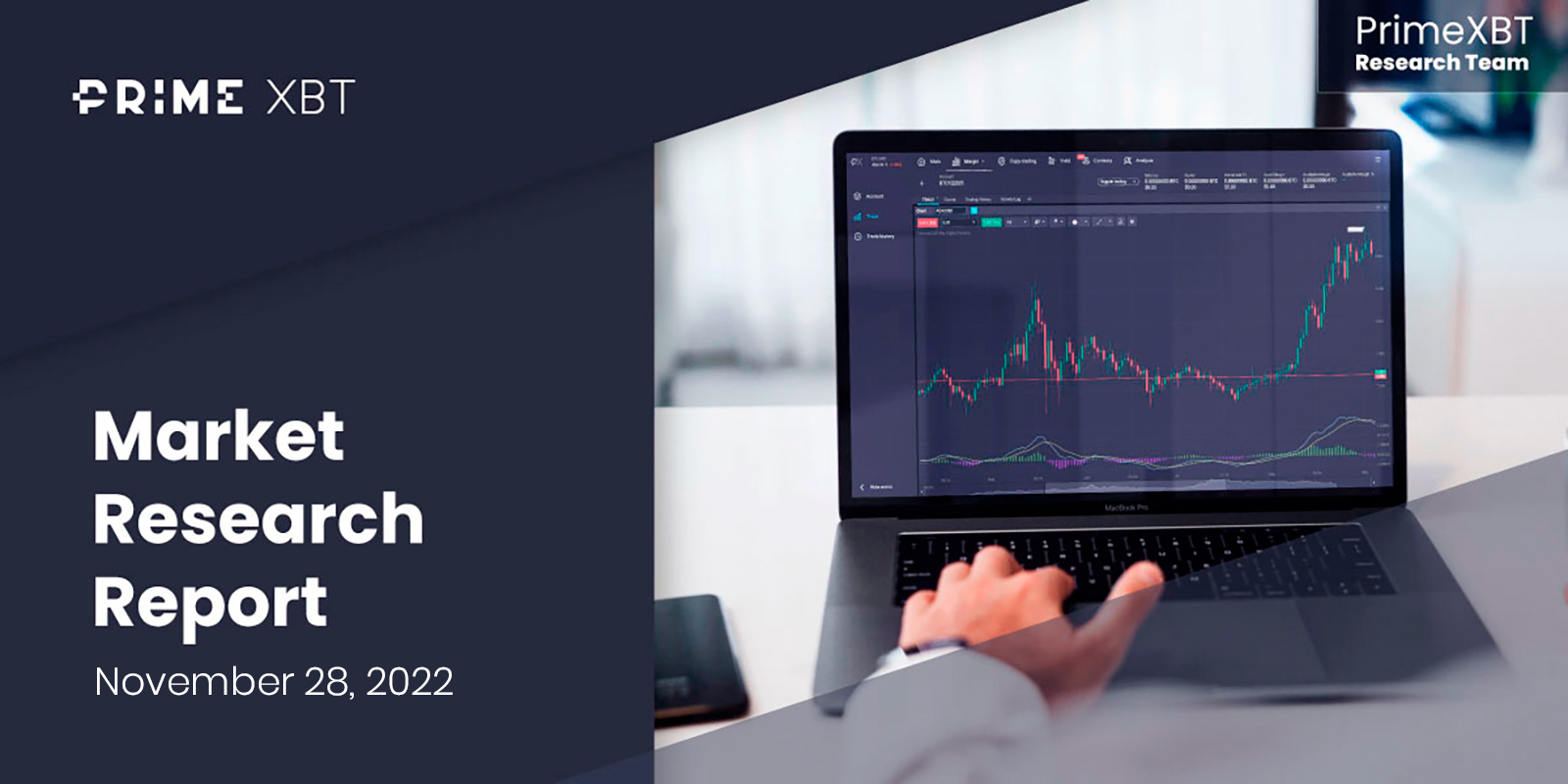 Stocks had a good week after Wednesday’s Fed minutes release showed that the central bank is seeing progress in its fight against high inflation and is looking to slow the pace of rate hikes, meaning that rate hikes going forward would be smaller, with traders expecting a 50-bps or lesser rate hike at the last Fed meeting of the year on December 13-14.

The minutes detailed that “a substantial majority of participants judged that a slowing in the pace of increase would likely soon be appropriate, and that the uncertain lags and magnitudes associated with the effects of monetary policy actions on economic activity and inflation were among the reasons cited regarding why such an assessment was important.” This in essence sort of destroys any chance of a 75-bps hike for the foreseeable future as officials want some time to pass to see the lagged impact of past rate hikes would have on inflation.

The revelation caused the benchmark 10-year Treasury yield to fall to 3.69% and the 2-year yield fell to 4.46% at the end of the Thanksgiving holiday shortened week, with the USD giving up its gains made early in the week on another week of selling. For the month, the DXY has lost more than 6% and has clocked its largest monthly decline since 2009.

Stocks however, cheered the dollar weakness. All three US stock indexes celebrated the Fed minutes by ending higher. The Dow increased by 1.78%, the S&P rose by 1.53%, and the tech-heavy Nasdaq was the laggard this time, rising only 0.72%.

Get Ready for the Stock Market Recovery

Gold rose in response to the weaker dollar, rising 1.2%, while Silver gained 3%.

Oil prices fell after EU officials are said to be setting the Russian oil price cap at between $65 and $70. Brent fell 3.4% while the WTI was lower by 4.2%.

However, in early Asian trading at the start of this new week, news of mass protest after China announced that it would continue its zero-COVID policy has set off a risk-off mode as stocks in Asia sold off and the US stock futures declined. Oil in particular, has declined by around 3% on the back of the news as at the time of writing.

In other parts of the world, New Zealand’s central bank delivered a 75-bps hike, the biggest rate hike ever in the central bank’s history, on the back of rising inflation.

Even though the US dollar dropped after the dovish Fed meeting minutes was published, the reaction from the crypto market was more muted than all the other asset classes at first. Further contagion news because of the FTX fallout kept its grips on investors’ appetite as worse contagion effects started getting known, this time, it was Genesis, which has suspended redemptions and loans at its lending unit.

After news about Genesis having problems broke, BTC holders started to send their BTC to exchanges again presumably for sale.

Last weekend, the amount of BTC on exchanges spiked much higher after a period of decline when users opted to self-custody their BTC. However, after news that Genesis could be the next possible crypto firm to file for bankruptcy, the amount of BTC deposited to exchanges rose sharply, from under 1.8 million units to over 2 million units between November 17 and 18.  While around half of that BTC could have been sold as the balance has dipped by around 50% now after a week of selling, there is still half of that BTC remaining on exchanges, which means that BTC could still see some selling pressure ahead.

BTC Near the Bottom Based on Past Trends

Even though the price of BTC could dip due to the increased number of BTC reserves on exchanges, let us take a step back to gain a better perspective of where we stand currently in terms of drawdowns compared with previous bear market bottoms.

As can be seen in the diagram below, we are likely around 25% away from a projected bottom should the past maximum drawdowns be a guide, which means that we are quite near the bottom based on historical trends.

This could imply that should a Genesis or another FTX-related contagion dump occur, it may be the final capitulation that many investors are waiting for. 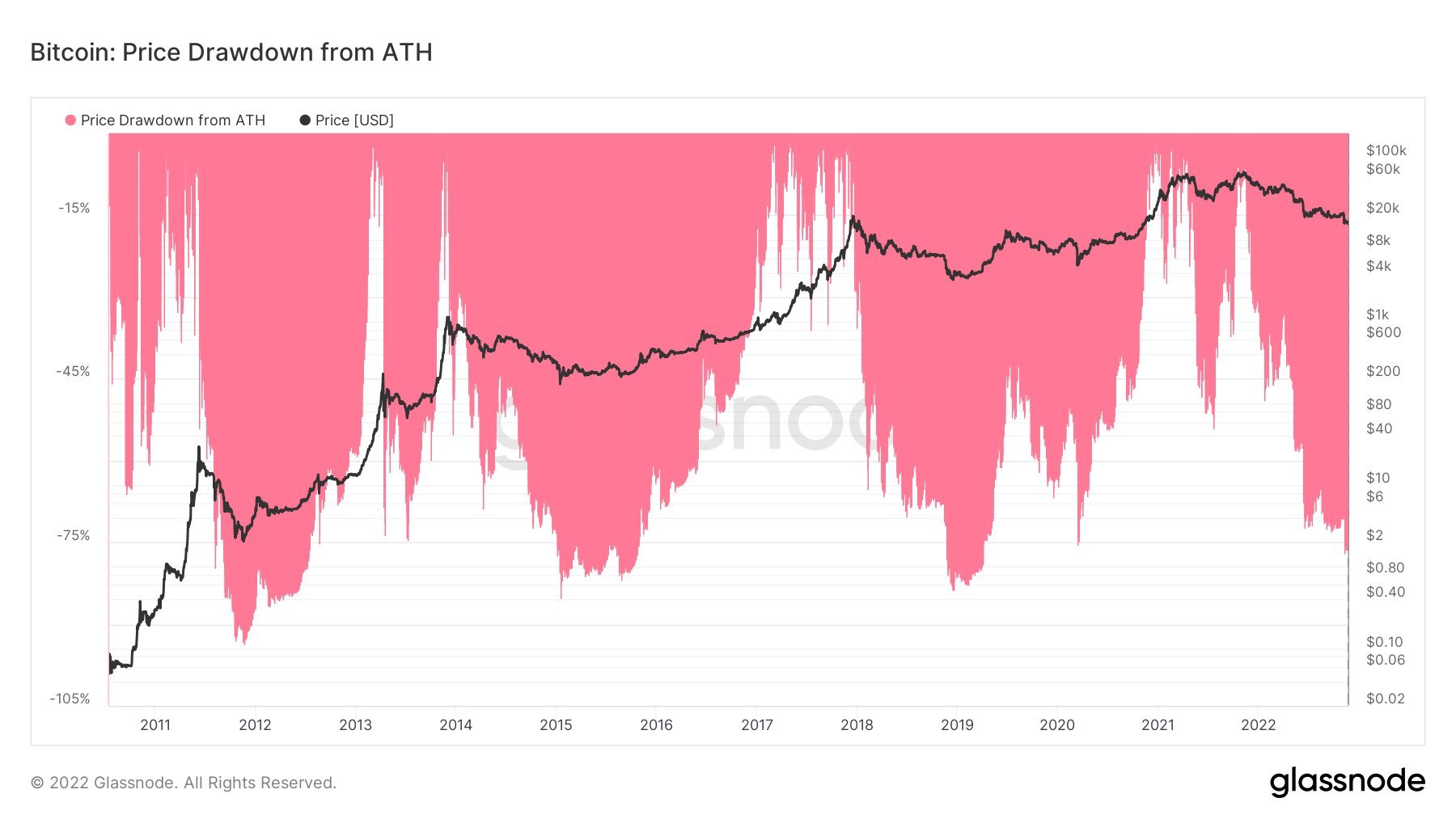 As the FTX saga continues to unfold, early last week, the FTX hacker who made away with around $450 million worth of cryptos finally started to sell his ill-gotten ETH. He began his dump on Sunday and continued throughout the week. News of his dump initially sent the price of ETH dropping 5% on Sunday when he started to convert his ETH into BTC in exchange for fiat.

However, ETH whales were not taking this “attack” laying down, as ETH whales supported the token en masse by buying more ETH on the dip.

On Monday, November 21, Ethereum saw its 5th largest single day whale accumulation for the year as large whales holding between $10 million to $1 billion worth of ETH collectively added 947,940 more ETH worth around $1.03 billion, which managed to cushion the hacker’s impact and even managed to send the price of ETH recovering, since the whales’ purchase of 947,940 ETH would easily absorb the 250,000 ETH that the hacker had to dump. 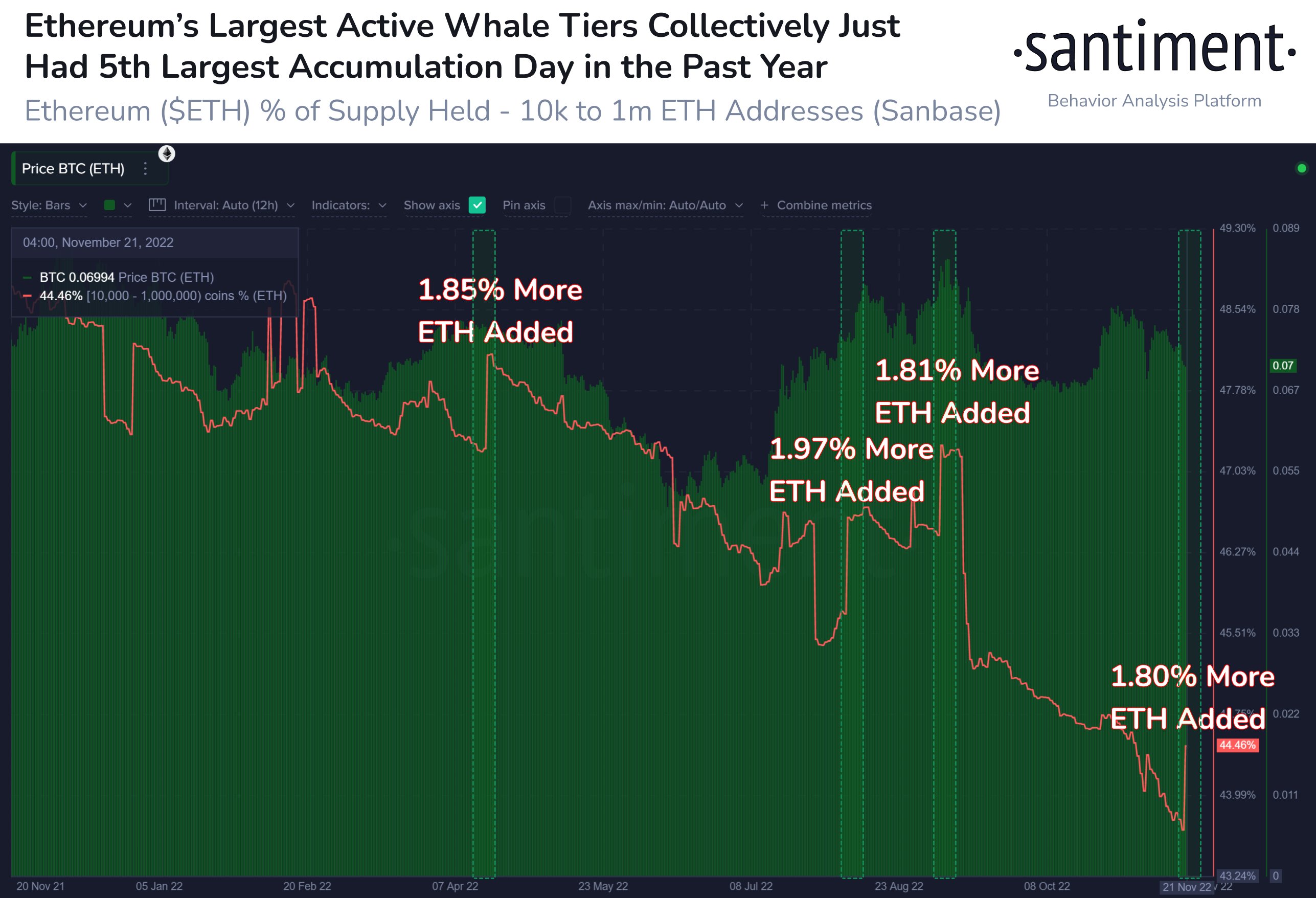 As a result, the price of ETH rose instead of falling, gaining 14% from the actions of these whales.

In the last three weeks, these whales have bought around 1.9% of the available supply of ETH in the market. In August 2020, the purchase of similar amounts of ETH by this group of whales led ETH to a 50% price increase over 5 weeks. Should this also be the trend this year, ETH could still have more upside to come even though it has already risen by 14%. 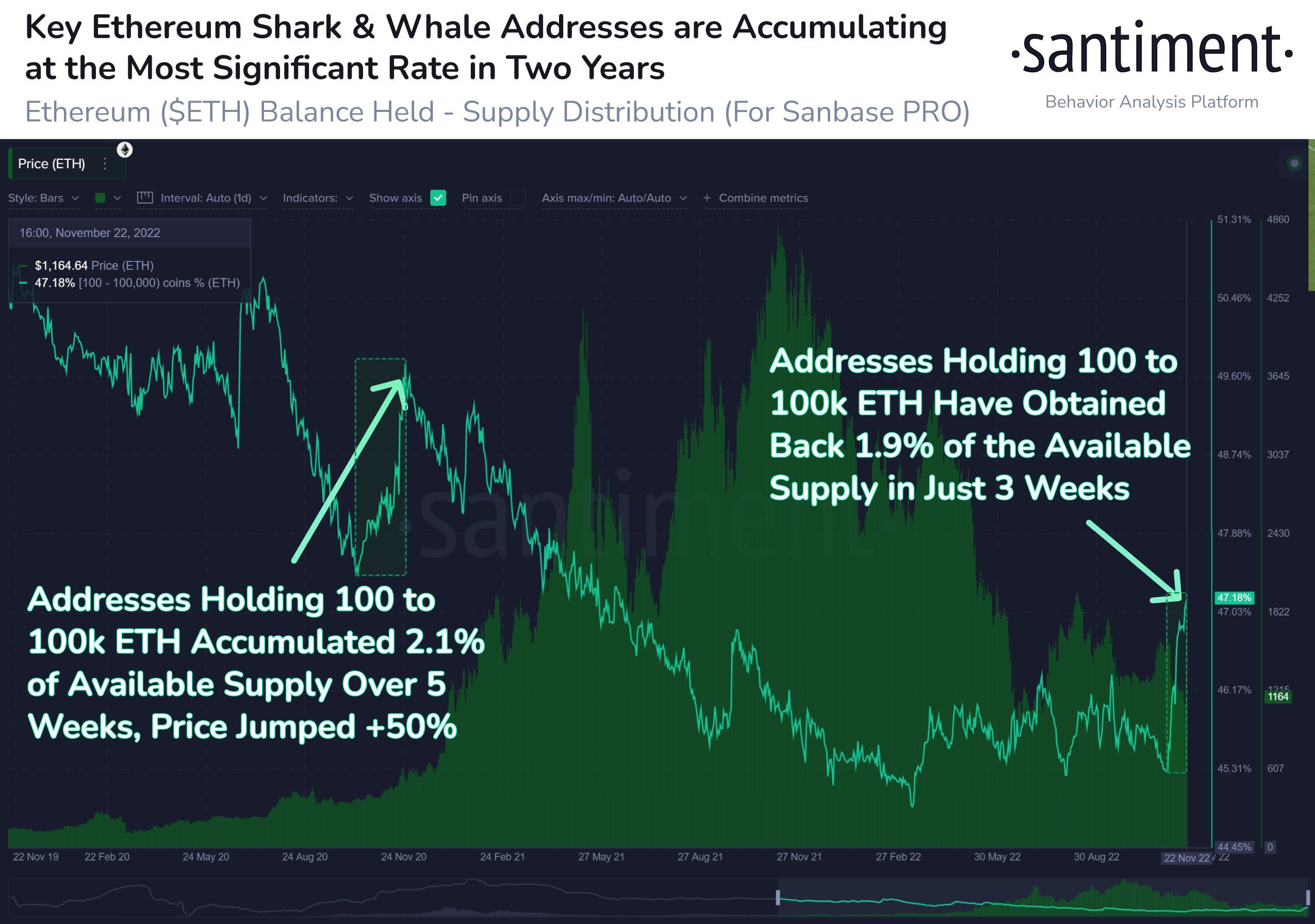 LTC Jumped 30% in One Day After Whales Accumulation

While ETH had a good showing, the star of the week was another old crypto name, as the turn for LTC to shine finally came. LTC had been sitting quietly out of the limelight in the entire 2021 bull run as the “sexy” new coins like SOL and AVAX took all the attention. As these new “sexy” coins start to get into trouble from the FTX fallout, the old legacy names like LTC, XRP and DOGE are outperforming. This change of fortunes could underlie a change in crypto investment thesis from the DeFi and NFT themes back into payment coins, possibly because investors discovered that the hot coins of 2021 were being chased up by high leverage – which could mean more unwinding ahead should more crypto firms get into trouble.

The jump in LTC was already sometime in the works as whale accumulation has been ongoing ever since Moneygram announced that LTC was one of three cryptos it would support on its platform, the other two being BTC and ETH. 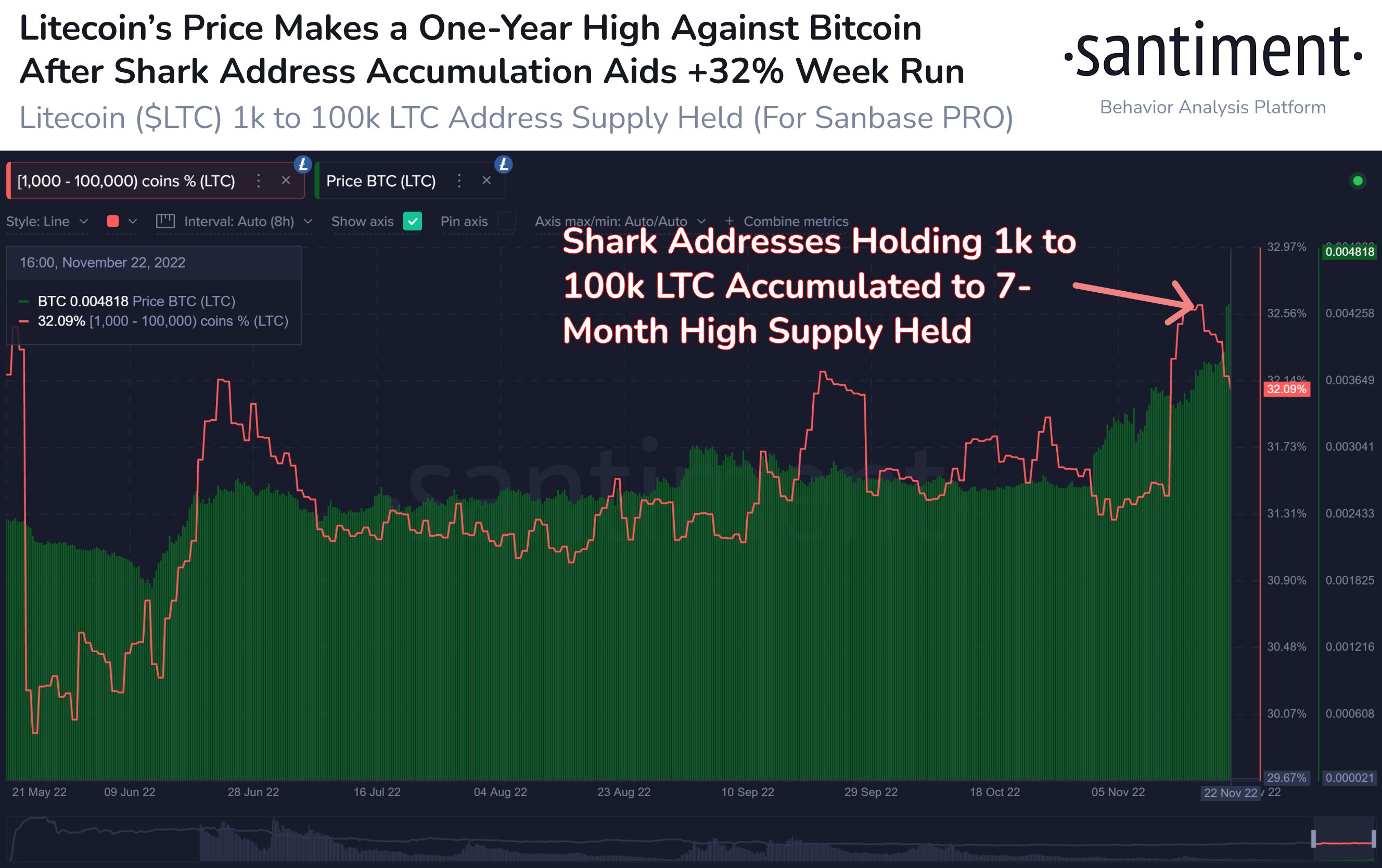 In the past 2 weeks, addresses holding 1,000 to 100,000 LTC had already accumulated around $43.4 million worth of LTC. Despite its price having jumped 30%, these buyers have not sold their stash yet, which could imply they are planning to hold it for the long-term. Perhaps the rewards halving that will be happening next August could be one reason why whales are buying LTC to hold. Other market rumors include a possible regulatory advantage coins like BTC and LTC would have over their peers due to their PoW consensus mechanism.

As the payment token theme starts to take gain traction, coins like XRP and DOGE are also seeing good price increases, XRP gained 14% while DOGE surged 40% after Elon Musk took up a user’s suggestion to create his own mobile phone for fear that the big tech names would ban his twitter app. Investors are buying up DOGE in the hope that Elon would integrate the coin into his would-be mobile phone and twitter ecosystem and make it as the default payment token.

For the traditional market, this week is filled with important events, but the most important one could be the core PCE price index that the Fed uses to gauge inflation. This report will be released on Thursday, December 1. Before that, on Wednesday, comes the ADP employment report, the JOLTS jobs opening report, as well as preliminary GDP data. The non-farm payrolls report will then cap the data filled week on Friday.

Another important event to note on your calendars is that Fed Chairman Powell will be speaking about the economy on Wednesday, November 30, 6.30pm UTC, at Brooking Institution in Washington. His speech could cause volatility to increase in the markets, so it may be helpful for traders to keep this date in mind.

Use volatility, trade on PrimeXBT 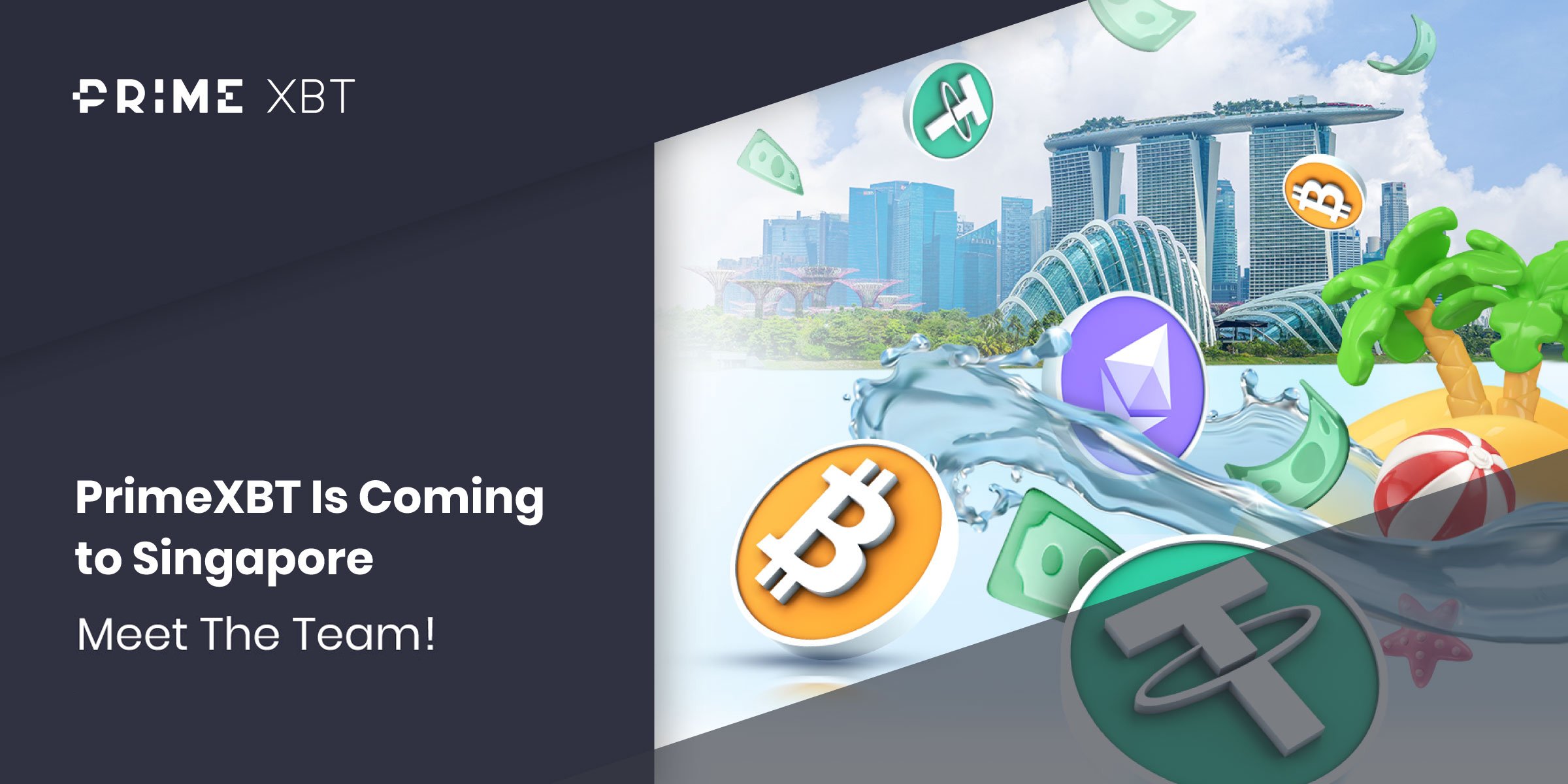 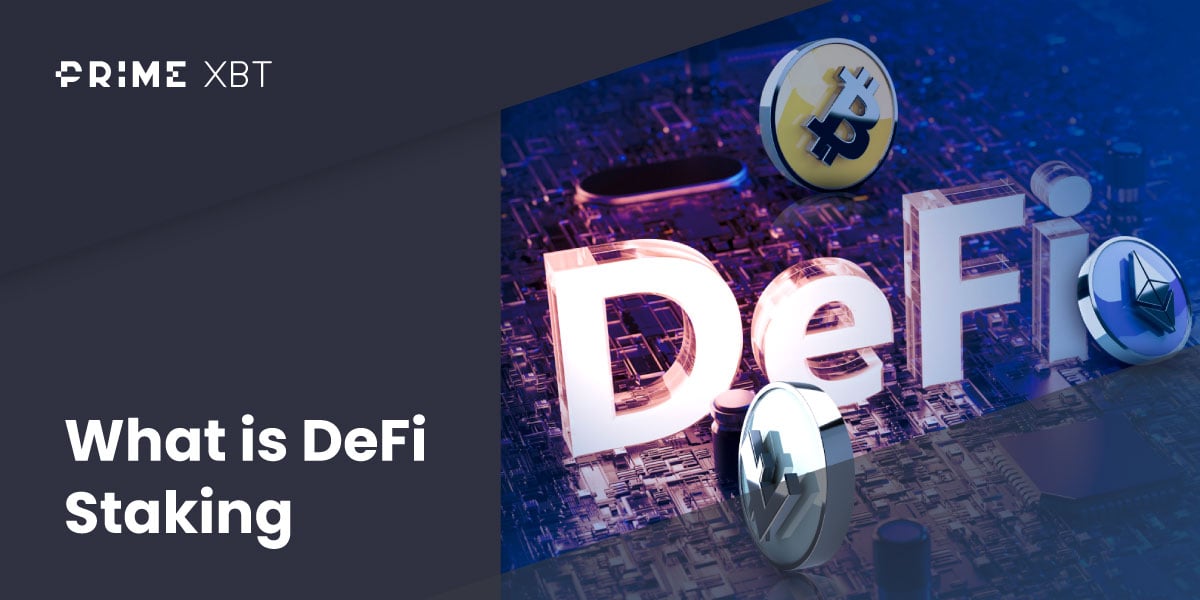 Education
What is DeFi Staking?

DeFi allows investors to stake or lend their coins, verify blockchain transactions, provide liquidity, and earn passive income along the… 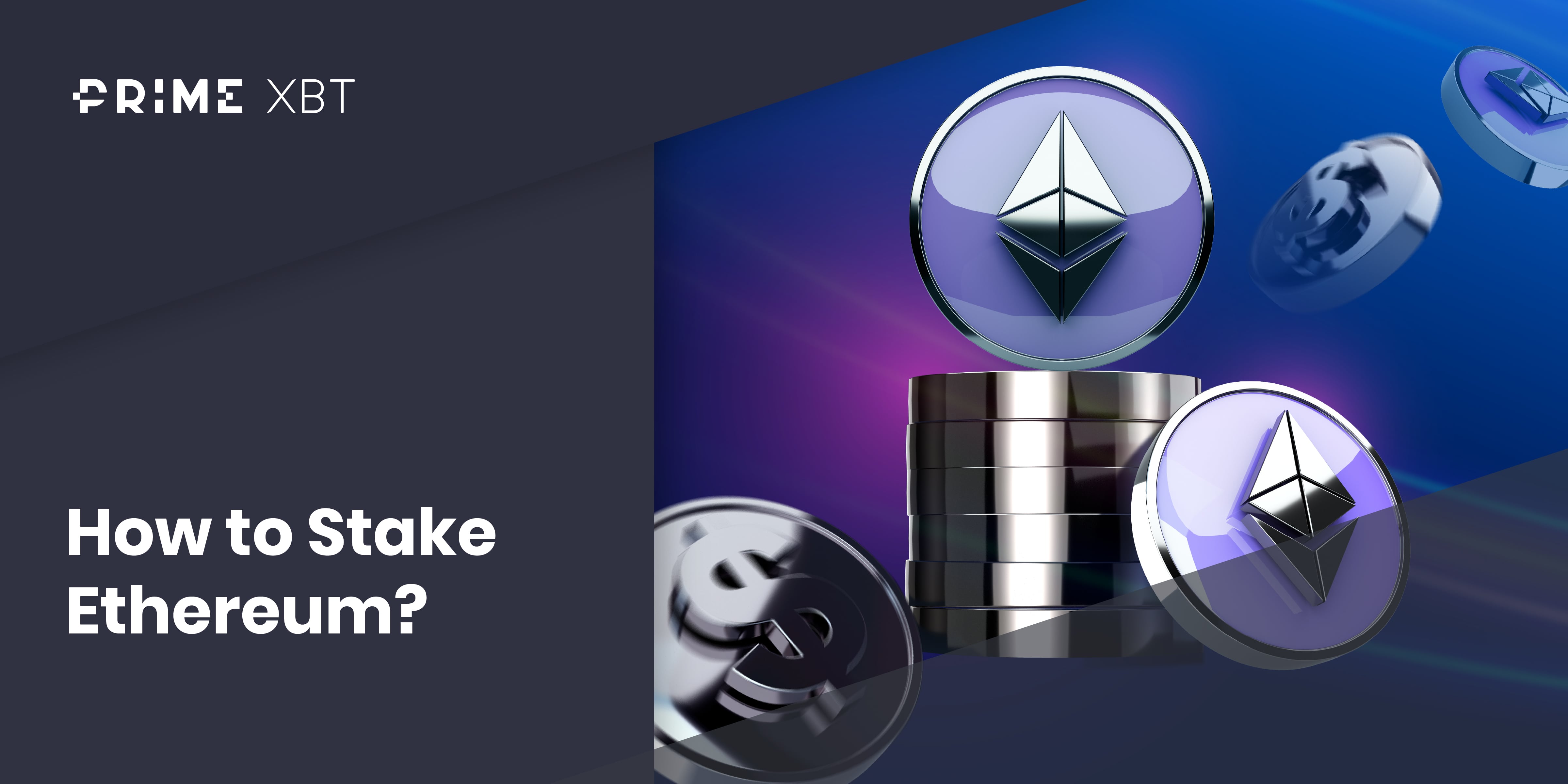 Education
How to Stake Ethereum

Staking your Ethereum allows you to passively earn rewards for your help to secure the network. Ethereum is switching into…