USDT vs USDC: Which one is the Better Investment? 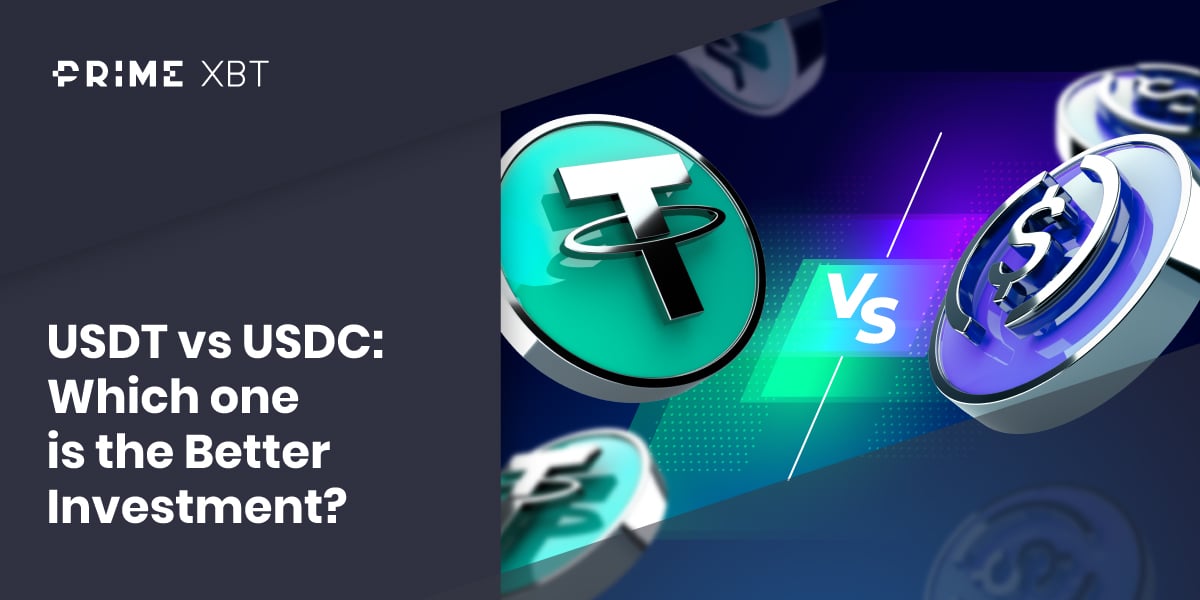 When you start trading crypto, you often hear the term “stablecoin.” Furthermore, you will learn that there is more than one out there, but the two biggest ones to consider will be USDT vs USDC. While both serve similar functions, there are some differences that you need to be aware of as well.

What is a stablecoin?

A stablecoin is a cryptocurrency designed to have a stable price, generally pegged to a commodity or currency or even having its supply regulated by an algorithm. Most of them are based on fiat currency such as the US dollar. However, there are some others out there that are pegged to gold and other commodities. USDT and USDC are both coins that are pegged to the US dollar, for example.

The two stablecoins that we are looking at in this article are mainly used as a replacement for the US dollar on the blockchain. Still, it is worth noting that Tether also has a handful of other currencies and gold, while USDC (USD Coin) also has introduced the USDE, which is the same thing, only  backed by euros.

Why invest in stablecoins?

There are a handful of reasons why you might be interested in owning or investing in stablecoins, and depending on your situation, you may hold them for a short time or a longer period. For example, suppose you are living in an economy that is suffering from massive amounts of inflation. In that case, you may use them to keep your savings the equivalent of the US dollar, thereby avoiding some of the punishment that inflation can bring. USDT and USDC can often be used for this function in some places worldwide, such as Argentina and Venezuela.

It’s also possible that traders will hold them to earn interest. There are a lot of different places where you can make interest on stablecoins, acting very much like a traditional savings account, although generally with higher interest rates.

Finally, the most common use is for trading. As these cryptocurrencies live on the blockchain, buying other cryptos with one of these stablecoins is much quicker than trying to go through the traditional banking system. USDT and USDC both offer plenty of liquidity for trading needs.

To take advantage of the use case scenarios of Tether, or USDT, you need to understand a handful of things about the coin before you put money into it.

What is Tether, and how does it work?

Tether tokens are assets used on the blockchain that behave like other digital currencies but are pegged to real-world currencies on a one-to-one basis. These tokens are referred to as “stablecoins” because they maintain their value without much fluctuation. Offering stabilitymakes transactions easier between parties.

To begin with, Tether is by far the largest stablecoin in the world, so it has a significant advantage because it is accepted in so many different places. It offers the stability and simplicity of fiat currencies coupled with blockchain technology, and you can earn a yield on it like a savings account. While anything pegged to fiat currency offers an easy way to transact, Tether has the advantage of being among the most-trusted stablecoins.

The Disadvantages of USDT

Tether have not made a significant attempt to show their inner workings to the public. There have been several issues waiting for an accurate accounting and forensic investigation into their holdings. There have also been accusations that Tether has been used to manipulate the price of Bitcoin or that it has been used to launder money for criminals. Furthermore, Tether is not divisible, which limits its functionality.

Looking at the USDC stablecoin, you will spot many similarities to Tether, and quite frankly, it is used in the same capacity. However, there are some nuances that you should probably be aware of.

What is USDC, and how does it work?

US Dollar Coin (USDC)is a stablecoin that functions like Tether, with a few minor differences. That being said, it is pegged to the US dollar, allowing for simplicity of transactions on the blockchain. USDT and USDC are both used quite extensively in this manner.

USDC stablecoin has a couple of advantages, not the least of which is the ease with which you can transact in US dollars on the blockchain. It offers reliable value, pegged 1:1 to the US dollar. You can also earn a yield on it, just like you can with Tether. Furthermore, Circle, the company that issues USDC, has a longer history of transparency and regulatory compliance than Tether, its primary competitor.

There are, of course, some disadvantages to USDC. For example, fees for withdrawing from exchanges can be high, as it is not as widely used as Tether. Furthermore, it is based on the Ethereum network, so you must be cautious. Also, although USDC is widely accepted, Tether is accepted at more venues.

The difference between USDT vs USDC

While both of these coins serve similar functions, there are some differences between USDT and USDC that you should  be aware of. Regardless, you will find that they both suit various blockchain needs quite well.

Both of these stablecoins have a history of stability. That’s precisely what they are built to do. Tether did drop down to $0.96 briefly at one point during the TerraUSD crash but was quickly corrected as traders took advantage of arbitrage opportunities.

That being said, it’s probably worth noting that Circle has a longer history of transparency than Tether does, so one would assume that in a true financial crisis, it might be USDC that fares better. USDT and USDC have both been stable overall, but crypto is still a new endeavour.

Tether has much more volume than USDC. The daily trading volume as of late 2022 for Tether is roughly $36 billion a day. By contrast, USDC trades about $3 billion a day. That being said, both USDT and USDC have plenty of liquidity.

Both of these coins are available on multiple blockchains. Ethereum can handle both, but Tether is currently hosted on a few more. In the next section, there is a chart that lists all available blockchains for each coin as of late 2022.

USDT and USDC are similar in their use overall, but the following table gives you a high-level view of the differences and similarities between both Tether and USD Coin. While they serve similar functions, they are used in different places and have other market capitalisation characteristics.

USDС vs USDT: Which one is the better investment?

The first question you need to ask yourself is, what blockchain do you plan to operate with? If one coin cannot work on the blockchain of your choice, but the other one can, it makes the choice easy. Both of these coins are reliable, but it must be noted that USDC is much more transparent about what it holds to maintain its currency peg. They only hold US Treasuries and US dollars. On the other hand, Tether has been less than transparent about everything it owns, and auditors have been frustrated by trying to “peek behind the curtain.” Because of this, if you are looking to protect your currency from inflation or perhaps even store it somewhere securely, you may be better off using USDC longer term.

Stablecoins offer plenty of uses and are often built atop Ethereum, although there are other networks that can be used as well. If you choose to use one of those networks, then the choice will be made for you as to which token you should be using.

One thing that traders do not like it’s the fact that Tether has been so opaque with some of its “cash equivalents” that back USDT tokens This has been a major problem, and there’s even been legal action taken against Tether in New York State. On the other hand, Tether has handled millions upon millions of transactions and is by far the biggest stablecoin out there. It is widely accepted and has had no real issues making transactions.

A lot of what you will be looking at is simply facilitating trades, which both do quite easily or trying to earn a yield on the currency. Both offer plenty of opportunities, which at this point are relatively interchangeable regarding their functionality. In other words, if you are looking to trade a currency pair, you will need to see what is available and which coin you should use. On the other hand, if you want to earn yield, explore the options at PrimeXBT and see which coin you will get a better return on due to the supply and demand of lendable tokens. USDT and USDC both fluctuate with yield potential like most other investment products.

Is USDT the same as USDC?

In a sense, they are both digital representations of the US dollar on the blockchain. It is worth noting that the Tether version also can come in a few other fiat currencies. For those who prefer transparency, USDC is the superior choice, but USDT is chosen for liquidity and investing in higher volume crypto.

Is USDC better than USDT?

It depends on what you are using it for. That being said, USDC is considered much safer because Centre makes a significant effort to comply with audits and governmental regulations and keeps fully backed reserves.

Can I send USDT to USDC?

They run on two different platforms; therefore, the only way to transfer Tether into USDC is to convert via a trading exchange. Because of this, USDT and USDC run independently.

Which is safer: USDC or Tether?

While both are considered very safe, there are many questions about Tether and what the “cash equivalents” add up to. There have been issues getting the company to be less opaque, while Centre, the company behind USDC, has been extraordinarily transparent. Because of this, USDC is probably the safer option. USDT and USDC have performed well so far, but there is always the concern that the underlying backing could fail.