Cardano vs. Ethereum: Which one is the Better Investment? 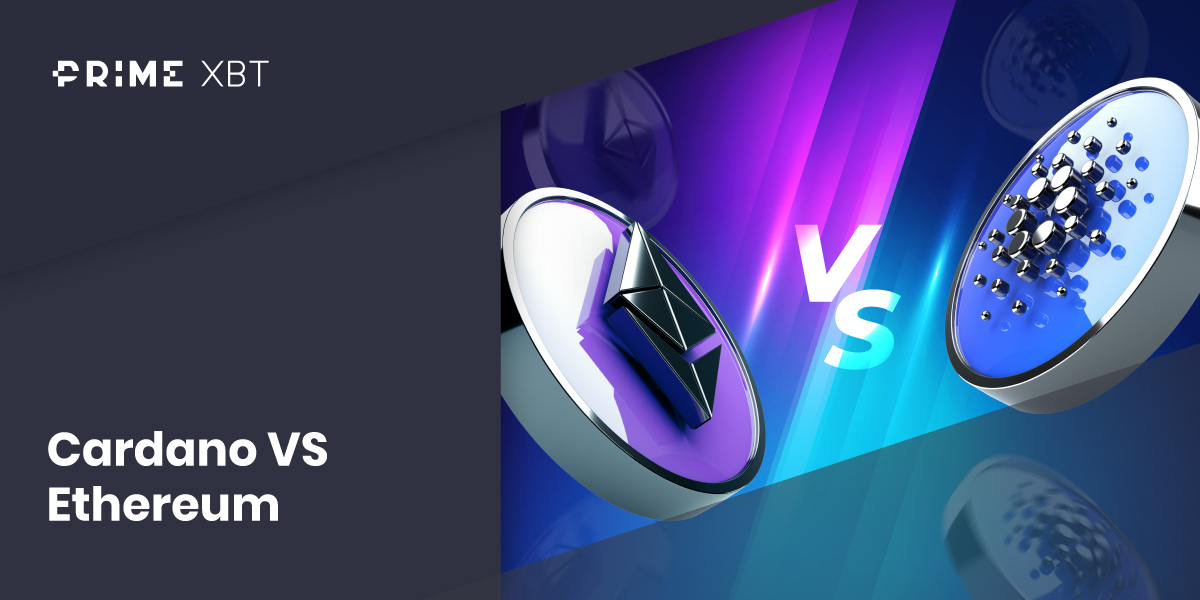 When comparing Cardano vs. Ethereum, there are many things to consider. Both can be invested in, and quite frankly, both have their uses. However, Cardano and Ethereum do appear to be2 ecosystems that are going to go in opposite directions as far as real-world use cases are concerned.

To fully understand the differences between Cardano and Ethereum, you will need to know how Cardano works and its advantages and disadvantages.

What is Cardano, and how does it work?

Cardano is an ecosystem that allows the development of tokens, dApps (Decentralized applications), and the freedom to create other uses for a scalable blockchain. The token, called ADA, is used to transact permissionlessly and is the easiest way to invest in Cardano.

The Cardano network appoints leaders responsible for validating transactions instead of having a copy of individual blockchains like Bitcoin. This allows for a faster transaction speed, one of the biggest advantages of the network.

Cardano is one of the most environmentally friendly blockchain networks and is also peer-reviewed by several leading academics.

One of the most significant disadvantages of Cardano is that it has no “first-mover advantage.” There are many competitors out there, including Ethereum, Solana, Avalanche, Binance Smart Chain, and others. Cardano has a rather ambitious scope of work, which has led to slowdowns in the advancement of the roadmap. 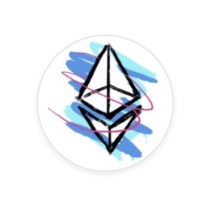 To make the proper analysis between Cardano and Ethereum, you must understand how Ethereum works. Also, you will need to understand its advantages and disadvantages.

What is Ethereum, and how does it work?

Ethereum is a blockchain that has its own programming language called Solidity. Ethereum is much faster than Bitcoin, making blocks easier to produce. However, it is not a cryptocurrency that has a limit on the number of coins, and it has recently switched over to a proof-of-stake protocol.

There are many advantages to Ethereum. The most obvious one is that it has a “first-mover advantage.” It has been around longer than Cardano and, consequently, has a fairly large ecosystem built already. Furthermore, many developers are already familiar with Solidity, the native programming language for the Ethereum ecosystem.

One of the most significant advantages is that Ethereum is so heavily decentralized. A handful of players have some more significant influence on the community, but as a general rule, it is considered decentralized.

Interoperability is one of the enormous advantages of Ethereum because when you build an application on Ethereum, you can instantly connect to hundreds of other existing protocols. Many of the different protocols you may hear about are built on top of the Ethereum ecosystem.

Speed has always been a sticking point for Ethereum, although it is getting better with the latest upgrades. There are much faster ecosystems out there that you can be involved in.

Solidity, although known by many, is still a unique language. Because of this, developers that wish to program in this ecosystem must learn an entirely new language. Other blockchain ecosystems have used more development-friendly languages that are already widely known.

High gas fees used to be a significant problem, meaning that transactions could be expensive. However, the latest upgrades have significantly reduced the amount of ETH needed to initiate a transaction. Furthermore, Ethereum has about a 3.3% inflation rate per year and has no maximum cap on the amount of Ethereum minted.

Critical differences between Cardano and Ethereum

Just as important as understanding the fundamental similarities between Cardano and Ethereum, you must understand the differences to decide how to use your investing capital.

When it comes to value, it can be measured in multiple different ways. As far as market capitalization goes, Ethereum dwarves Cardano. This is because of the “first mover advantage” and the fact that Ethereum has been so flexible for so long. That being said, both do have an intrinsic value argument to be made. However, it appears that Cardano is shifting toward smaller economies, perhaps bringing some of the more backward economic systems into the future.

Ethereum should continue to be one of the biggest platforms on earth, and with the recent upgrades, the costs of using Ethereum have plummeted. Whether or not this inside swallowing Cardano in the future is an open debate, but it seems like the people behind Cardano have shifted markets to avoid going head-to-head with Ethereum as best as possible.

Cardano initially reacted to Ethereum, which the inventor of Cardano worked on. Charles Hoskinson left the Ethereum project to make a greener solution. Ethereum was meant from the beginning to power decentralized applications on its network and offered smart contracts. This means that the blockchain could operate independently, allowing trustless environments.

Ethereum was created in 2015 using its programming language called Solidity. Although it can function as a medium of exchange similar to Bitcoin, it is better thought of as a decentralized blockchain platform offering a public ledger for verifying and recording transactions between pieces of software.

Ethereum migrated from a proof-of-work standard to a proof-of-stake standard in 2022. This has brought down the cost of gas fees and the environmental impact of Ethereum miners. Cardano was proof-of-stake from the beginning and began in 2017. Cardano does aim to be a decentralized application development platform with a multi-asset ledger and verifiable smart contracts. Ultimately, the biggest problem that Cardano will have is that Ethereum has such a tremendous head start. Still, Cardano has seen several iterations to improve performance over the last couple of years. Furthermore, Cardano is peer-reviewed, something that most blockchain ecosystems lack.

For the average investor, one of the most significant differences between Cardano and Ethereum will be the number of coins that are going to be minted. Cardano has a maximum supply of 45 billion coins, while Ethereum has a theoretically unlimited supply. Ethereum has a built-in mechanism to slow down inflation, but as far as scarcity is concerned, Cardano will end up winning this argument.

What Makes Ethereum and Cardano Similar?

Even though there are some stark differences between Ethereum (ETH) and Cardano (ADA), there are also some similarities. Knowing this is crucial if you wish to unlock the value proposition of both coins.

While Ethereum spent most of its evolution as a proof-of-work protocol, mining has now been left behind as the Ethereum network has switched to a proof-of-stake protocol. This means that both Ethereum and Cardano allow for the staking of crypto to earn more coins. This can be done by becoming a node or other alternatives, such as liquidity pools. 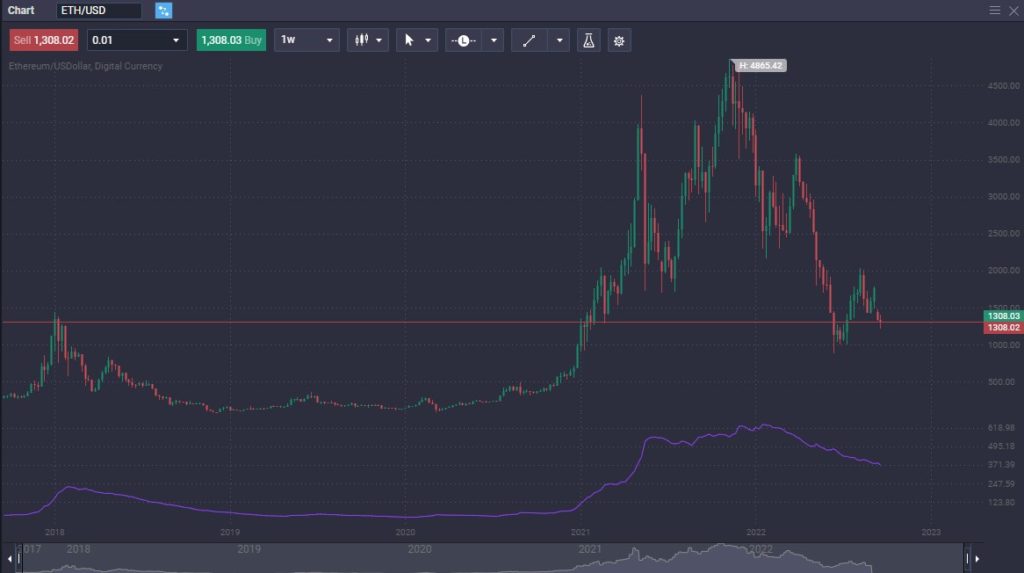 Cardano started with a price of $0.0024 during its pre-launch sale. In September 2021, Cardano reached a price of $3.10 but has since crashed, like the rest of crypto. Ethereum initially was priced at $0.311 but reached as high as the $4800 region in late 2021. However, it has also crashed along with Cardano.

Cardano vs. Ethereum: Which one is the better investment?

It isn’t a simple “Which one is better” question. The networks have different advantages, but the Ethereum network is much more extensive and has a huge adoption lead. This isn’t to say that Cardano isn’t going to grow, but it will probably never be bigger than Ethereum.

The Cardano network seems to be attracting much attention in smaller, less developed economies, particularly in Africa. Charles Hoskinson has stated more than once that they will go out of their way to attract these areas. The main advantage for Cardano is speed and costs, but Ethereum has made considerable strides in the cost and speed issues with the latest upgrades.

Both will be important in the future but will likely have vastly different use case scenarios. You could probably say this about most crypto ecosystems, as we are still trying to “figure things out” regarding cryptocurrency use cases. Most traders own more ETH (Ethereum) than ADA (Cardano).

Both Cardano and Ethereum are interesting and exciting blockchain networks. There is a significant “first-mover advantage” in Ethereum, as Cardano wasn’t developed until after Charles Hoskinson left the Ethereum project. (He was also one of the original team members of that project.) The head start that Ethereum enjoys is something that you shouldn’t forget, but it doesn’t mean that Cardano won’t have many use cases.

The future for the Cardano network seems to be leaning towards helping third-world economies, as the Ethereum network has many expenses. However, Ethereum also features a wide array of developers and use cases being worked on.

Both are technology leaders. Cardano is also peer-reviewed, so while it is being done deliberately, it also makes the development of the Cardano network a bit slower than others. Both have attracted many development teams, and therefore it is likely that they are both solid additions to a crypto investment strategy.

If you are looking to profit from the price movement of the coins, the easiest way is to do it through CFD markets, like the ones offered at PrimeXBT. The contract for difference (CFD) market is an agreement that two parties make on a trade that tracks the price movement of an underlying asset, in this case, Ethereum or Cardano. The advantages are numerous, as there is no need to take custody of coins, and you can go long or short a market. This allows you to profit from a falling market as well. Also, leverage will enable you to trade larger positions than you usually would, allowing for more significant potential profits.