USD and USDT: What is the Difference? 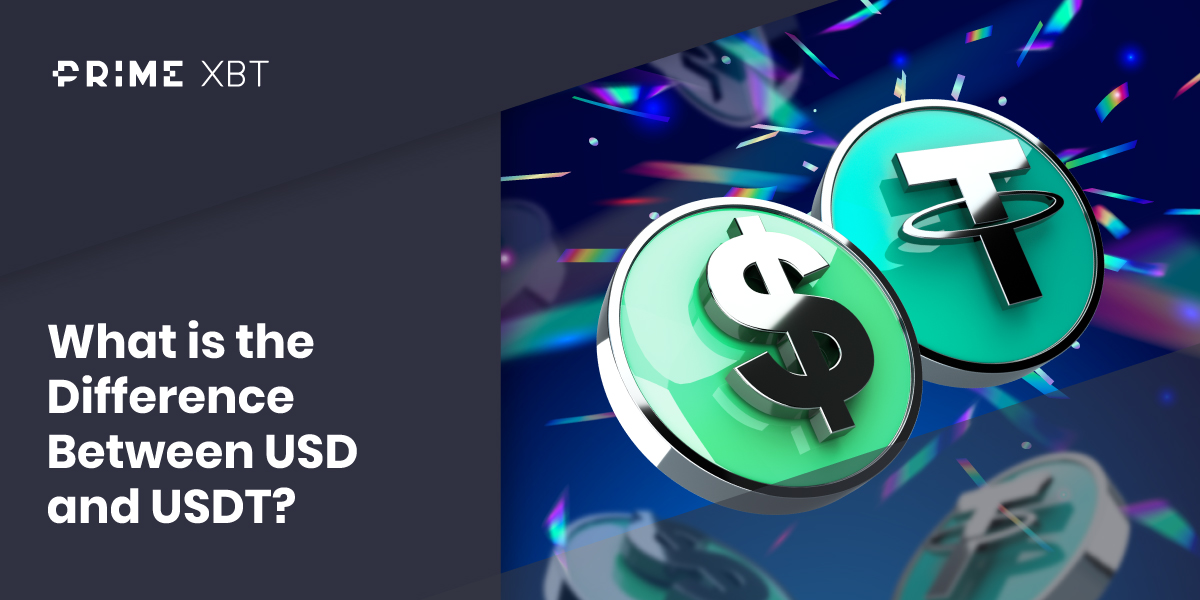 When you begin your crypto trading journey, you will see the symbol “USDT” often. This refers to Tether, the digital equivalent of the US dollar. However, it is not an actual US dollar, and you need to be aware that USDT is what’s known as a “stablecoin,” which is designed to have the same value as its underlying asset, in this case, the US dollar. While in short-term trading, the difference is not that relevant, if you spend any serious amount of time trading crypto, you should know the differences and similarities between the two.

“USD” is the abbreviation of the United States dollar. It is the world’s reserve currency, used in more international exchanges than any other currency worldwide. Many countries around the globe even borrow US dollars instead of their own national currency.

The US dollar is the “measuring stick” of other currencies and assets worldwide. For example, when you think about the price of gold, you are more likely than not to think about it in terms of US dollars. While you can buy gold in yen, euros, or pounds, the reality is that most people will quote the price as something like “$1812.”

“USDT,” or Tether, is a blockchain-enabled platform designed to allow the use of fiat currencies digitally. It is known as a “stablecoin,” meaning its value is pegged to the value of another asset.

What is Tether, and how does it work?

Tether is a stablecoin used to replace US dollars in crypto transactions. It’s the third largest cryptocurrency behind Bitcoin and Ethereum. It’s the largest stablecoin in the world, with a market capitalization of nearly $83 billion as of summer 2022.

It is often used as a place to store funds by crypto investors as it remains stable and keeps you out of volatile moves in other markets. It holds commercial paper, short-term deposits, cash equivalents, corporate bonds, secured loans, and cash to keep the supply of Tether backed by a similar amount of US dollars.

Tether was launched initially as RealCoin in July 2014 but was rebranded as Tether in November of that year. It is owned by Hong Kong-based iFinex, which also owns the crypto exchange BitFinex.

There are many advantages to using Tether, not the least of which is that multiple blockchains support the coin. Tether is also available in other currencies and adds more as time goes on. It has massive amounts of liquidity, and the widespread adoption of the coin means that it has taken its place as the “reserve currency” of the crypto ecosystem. Furthermore, it lives on the blockchain, so it is much quicker than digital fiat.

Tether is only backed by roughly 3% of cash reserves, as the rest of the value comes in holding other forms of “cash equivalents.” This includes government bonds, as well as corporate bonds. Because of this, having Tether is not the same as holding US dollars. Furthermore, the company holds the sole rights for mining Tether, meaning it is centralized.

The difference between USD and USDT

While there are many similarities as far as value is concerned, you should be aware of some differences between USD and USDT.

Stability is something that typically is found in both assets, but it should be noted that it’s not always the case. During the collapse of TerraUSD, Tether dropped to a value of $0.96. Ultimately, the US dollar will always be worth a single US dollar, even though it floats.

You will find that both USD and USDT are quite often used to trade assets, including cryptocurrency. However, some market makers and brokers use Tether, although they typically have some “on-ramp” for US dollars to flow into their ecosystem and then exchange for Tether. On the other hand, you may find that Tether cannot be traded on some platforms. This is probably one of the most significant differences between USD and USDT – whether a platform offers Tether.

Regarding usability, the US dollar can be used in just about any transaction worldwide. If you find yourself in a place like the Bahamas, you will notice that the local currency is entirely interchangeable with the US dollar. It’s not uncommon to receive change from a purchase in a mix of Bahamian and US dollars.

On the other hand, Tether is only used digitally. Furthermore, it is only used in blockchain trades. For example, you do not go to a store or an online vendor and use Tether to pay for items. It is solely used to represent the equivalent of the US dollar on the blockchain.

As far as a bank account is concerned, they only take US dollars. The tether cannot be deposited, at least not in a traditional bank. However, you can earn more yield with Tether under most circumstances by either staking or loaning it out.

USD vs. USDT: Which one is the better investment?

At this point, it comes down to what your purpose is going to be. For example, if you try to store US dollars or Tether in an account and earn interest, you will almost always make more through Tether. It’s not uncommon to see people go back and forth between dollars and Tether, depending on what they are doing.

However, there is a certain amount of risk to holding Tether. There are many questions about the underlying assets propping the coin up. There are some people out there that are worried Tether could bring down the entire crypto market. However, the company claims to have plenty of bonds and cash to cover the amount of coins floating around in the world. Nonetheless, Tether has yet to produce a verified audit.

Regardless of how you feel about fiat currency, the United States dollar is the safest asset to own in the world, just as bonds are considered “cash equivalents.”

How to Buy USDT?

To buy Tether, you generally need a broker or intermediary to either trade it or add it to your  wallet. PrimeXBT allows investors to buy Tether directly from the website through its partners. It also allows you to buy Bitcoin, USDCoin, and Ethereum with just a few clicks.

What can I do with my USDT tokens?

There are a handful of things that you can do with Tether, and depending on what your investing goals are, you may find yourself doing one of the following:

“Hodling,” or holding onto an asset through thick and thin, is something that Bitcoin traders do, but most people do not do that with Tether. Unless you are staking it, which is an entirely different process where you earn interest, it’s just sitting there doing nothing.

Most traders who are holding on to Tether are simply waiting for a potential trading opportunity to set itself up.

You can trade with Tether, as it is quite often the second currency in a cryptocurrency pair, or what is known as the “quote pair.” This is a digital representation of the United States dollar. Therefore the price of Bitcoin, Ethereum, or any other crypto against the “USDT” is essentially the same as the US dollar. The most common use of Tether is for this exact process, trading back and forth between other cryptocurrencies.

“Staking” refers to lending out your coins for either the blockchain to verify transactions or for other traders to borrow. At PrimeXBT, you can earn interest on your Tether holdings to benefit like a typical savings account. This is done through Covesting in partnership with PrimeXBT. This allows you to earn interest on your idle crypto

While the coin Tether represents the US dollar, the two are not the same thing. Yes, you can use it in trading to represent one dollar and buy and sell crypto against it. However, once you exit the crypto ecosystem, that’s where Tether no longer serves a function. You will eventually turn that Tether into dollars, euros, or another currency.

Tether offers the added benefit of earning more interest than US dollars, or perhaps better put, a savings account in a traditional financial institution. The amount of interest earned on Tether being staked or loaned out will vary due to supply and demand issues.

Tether is also much quicker than digital fiat currency, so it’s  superior in terms of transaction times. This is why you see so many exchanges offer it or coins based against it because it can be settled quickly. However, it is worth noting that Tether has paid fines to the New York State Attorney’s office of $18.5 million and has been forced to discontinue trading with any New York State residents or entities. Furthermore, in October 2021, the US Commodity Futures Trading Commission announced that Tether agreed to pay a $41 million fine over claims that US dollars fully backed Tether.” There are other issues where the parent company had borrowed money from Tether’s reserves to offset corporate and client funds frozen in a money laundering probe. In other words, Tether does not exactly have the cleanest of histories.

That said, it is still widely used and considered liquid because so many traders will buy and sell it.

Are USD and USDT the same?

No. The US dollar is the fiat currency of the United States, while the “USDT,” or “Tether,” is based not only on US dollar holdings but also on US sovereign debt and a certain amount of corporate debt.

Is USDT based on USD?

Partly. While there are a significant amount of cash holdings that Tether holds to back the coin, the company also has bonds from both the United States government and large corporations.

Why do we use USDT instead of USD?

Because Tether acts as a digital replacement, it also allows for quicker transactions as it is already on the blockchain.

Can USDT be transferred to USD?

You can trade the USDT/USD pair on most exchanges to turn your Tether into US dollars for withdrawal.